You are here:
NewsVacant Property Security 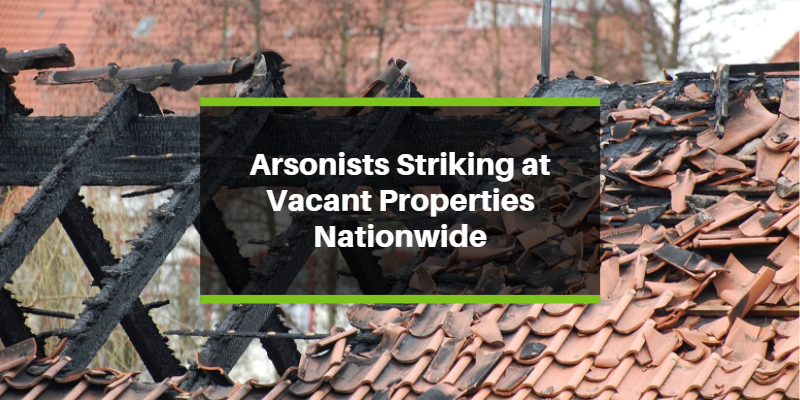 A quick look through the latest news soon shows the overwhelming number of cases, this year alone, of arson attacks.

As a Landlord or Property Manager, it’s important to be aware of all possible threats. With vacant properties being common targets for arson attacks, we’ve compiled the reports, facts and solutions to consider when securing your own property against this threat.

In the past few months, numerous reports have come through regarding the destruction of vacant properties due to arson. With no set pattern across the types of buildings being targeted, it seems that any vacant property, be it residential, commercial or industrial, is at risk.

Last month, Nuneaton Fire Station crews were called to the scene of a vacant residential property ablaze. Previously subjected to trespassing and vandalism, the arson attack resulted in a devastating fire and has left the property owner with wide scale damage and huge repair costs. In Birmingham, it was reported that a vacant pub that closed in 2017 saw numerous cases of antisocial behaviour and arson attacks. Earlier this year, the building suffered its most destructive case of arson yet, leaving the property with a destroyed roof. As the building was not correctly secured, it became a hotspot for crime and is now in the process of being demolished.

While we are seeing residential and commercial properties being common targets for these attacks, industrial properties are also at risk. A vacant industrial site in Desborough has been subjected to multiple arson attacks this year alone, with the culprits breaking into the buildings and starting fires within by burning piles of rubbish. 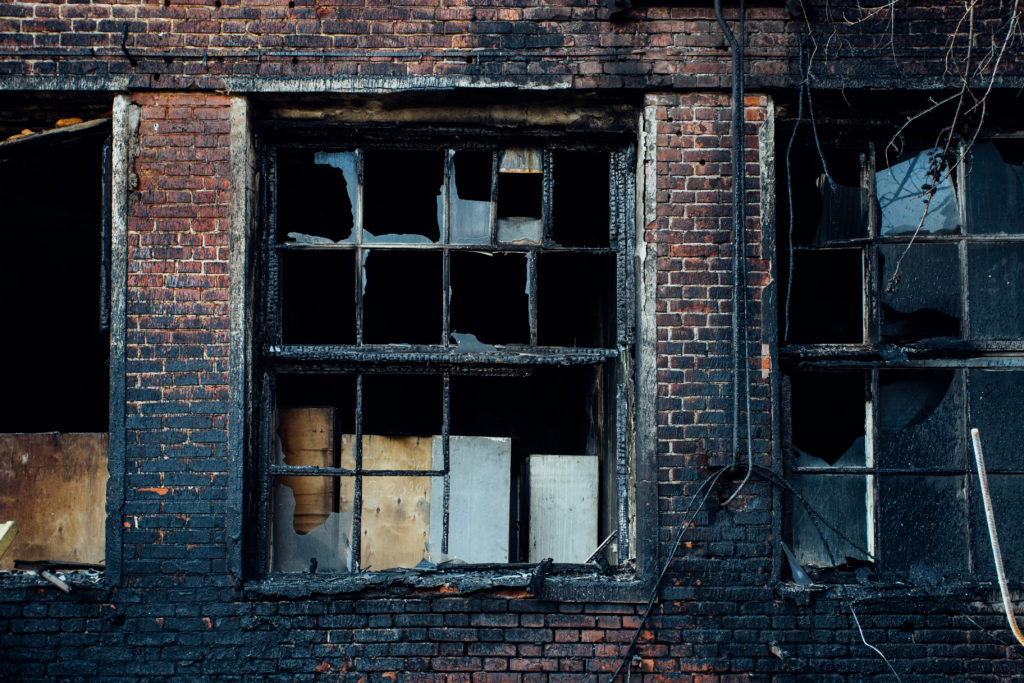 Arsonists: Who are they?

Who are carrying out these destructive and possibly life-threatening attacks? The short answer is, it’s extremely difficult to identify the culprits in most cases.

Arson can easily be carried out with just a small ignition of fuel, which then spreads and soon engulfs an entire property. With the property being vacant and the criminals having time to flee the scene before the fire draws attention, arson attacks are likely to go unnoticed before it’s too late.

Why do people commit arson?

With so many occurrences of arson across all types of vacant properties, it can be difficult to understand the motive behind such attacks. As seen in the both the residential and industrial site fires mentioned above, these properties are often targeted by vandals with no other motive than to cause damage as a form of excitement.

A common stereotype for arsonists is that they’re acting out of revenge or spite. However, studies have shown that the culprits are often young people who may not be fully aware of the consequences and are acting out of boredom.

While some culprits may be one-time offenders, there is also evidence to show that arson is sometimes carried out multiple times by the same individuals as a source of entertainment. A 50-year-old man in Hartlepool was jailed after being caught in connection to a burned down church, and discovered to be a serial arsonist. With a fascination for fire and committing multiple acts of arson, this man had no other motive than the enjoyment of watching properties being destroyed at his will.

How can you protect your vacant property?

It’s clear that no property is safe from the random criminal acts of arsonists. However, with vacant properties being an easy target, here are the best methods of protecting your own vacant property from arsonists.

Traditional methods of ‘boarding-up’ vacant properties involve nailing plywood or OSB to the outside of window frames and doorways. While this may prevent pests from entering, it does very little to stop intruders due to it being easily removed with basic tools. In the context of arson however, wooden boarding-up of properties, quite literally adds fuel to the fire.

Arsonists can easily remove the panels to gain entry or even set alight the wooden boards themselves, letting the fire spread across the property.

A modern solution to this age-old problem is to ‘board-up’ with solid steel security screens and doors. By using galvanised steel screens with anti-tamper fixings, and steel doors with multiple deadlocks, all vulnerable access points are blocked and cannot be opened without specialised tools or the right keys.

These robust steel installations cannot be set alight and leave no vulnerable openings, providing effective security for your vacant property. A common method of arson is to take advantage of vulnerable areas and openings on a building as to minimise time in contact with the property. A recent case in Hull, shows just how easily arson can be carried out through a letter box opening, and the importance of ensuring vulnerable access points such as this are secured. 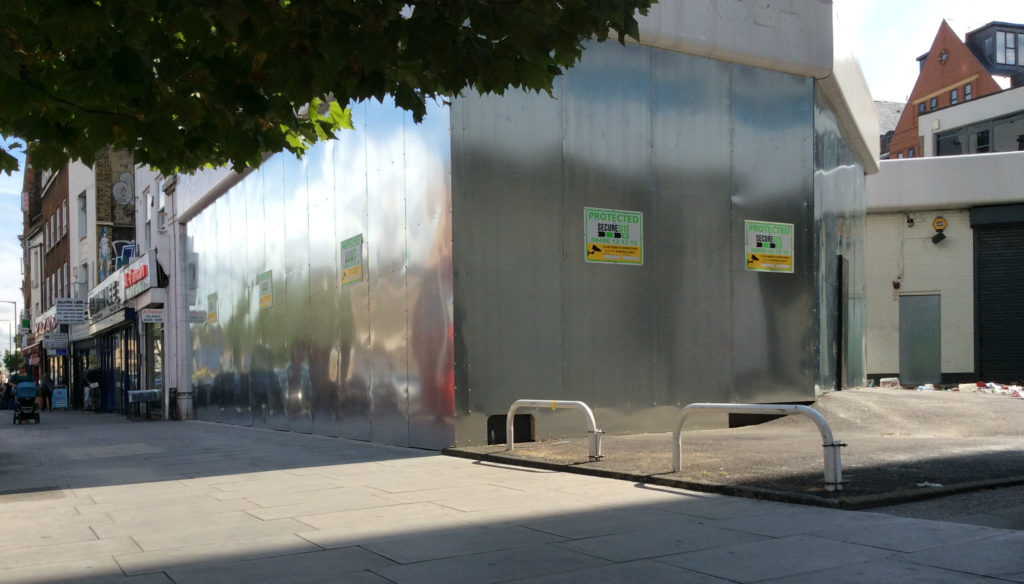 Professional decommissioning remains an excellent method of safeguarding your vacant property from several threats. In the context of arson, decommissioning your property can dramatically reduce the damage caused if a fire were to start. By safely cutting off power to the property and shutting off the gas supply, you are removing additional fuel that would strengthen a fire.

While not necessarily a preventative measure against arsonists, it effectively compliments further physical security, such as steel screens and doors, to reduce the potential damage to a property should an arsonist strike.

Properties can become vacant at short notice leaving you with an unsecure building, vulnerable to all sorts of criminal activity, including arson. Almost instant protection for your vacant property can be achieved through hiring uniformed security guards. The best security guard providers can install guards on your site within three hours of instruction.

By quickly installing guards, you are ensuring that you have eyes on your property, 24/7, until steel security measures can be put in place.

With the overwhelming number of arson attacks on vacant properties across the nation, and the complete disregard of the effects they have on Landlords and Property Managers like yourself, the threat arsonists pose is clear.

By partnering with the right security provider, you can secure your vacant property from unauthorised access with steel window screens and doors, reduce the potential damage of fire through decommissioning and deploy urgent uniformed guards to patrol your vulnerable property at short notice if necessary.

Get in touch today to speak to a security expert about your unique requirements and mitigate any threats to your property.