Have You Stopped Using Your Turnstile Over COVID-19 Concerns?

You are here:
Construction Site SecurityNews 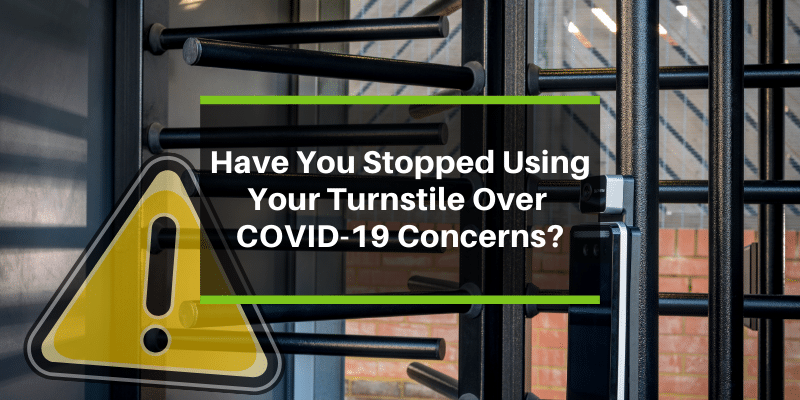 Are you getting the most out of your construction site turnstile? It’s a frequent question we ask our clients.

Because they’re highly technical pieces of equipment and, often, people just aren’t using them to their fullest potential. In fact, some have even stopped using them altogether due to Health & Safety concerns around COVID-19.

In this post, we draw upon several conversations we’ve had with construction site managers over the past few weeks who were simply unaware of how adaptable their modern-day access control turnstile really is.

Could you be missing out with yours? Read on to find out.

Whilst we uncovered many reasons as to why turnstiles have been either turned off, moved or put on ‘free spin’ mode, we found that, resoundingly, it was due to COVID-19 compliance fears and the uncertainty around what you can and can’t do during these unprecedented times.

Too add to this, many H&S inspectors have assumed that using a turnstile equals cross contamination with potentially hundreds of site workers touching the same surfaces throughout the day, which, of course, has fuelled this reaction.

This, inevitably, has led to managers changing the way they control access to their site, with site workers acting as guards monitoring access procedures, making their turnstile effectively redundant. Of course, this has resulted in increased labour and reduced efficiencies – not to mention the added risk of human error.

No Fingerprint? No Problem

So, you can immediately mitigate the risk of workers touching the same surface repeatedly by using the fingerprint scanner to scan their CSCS card to authorise access instead.

“But…CSCS cards can get misplaced”.

CSCS cards – or any cards for that matter – are prone to getting lost, damaged or stolen, which is why these turnstiles also allow users access via their phone – in a similar way to how we use Apple Pay.

And, as you’ll be aware, the chances of losing your phone over a card are very slim.

So, even if you’re not using your fingerprint functionality, you and your workers can still benefit from either CSCS card or mobile phone access.

One of the main selling points of a modern-day biometric turnstile is the face recognition facility which scans your facial features before granting you access to a site, even if you’re wearing a face covering.

However, we found that, in a very small number of cases, people didn’t like the idea of a machine that logs your facial features into a database.

To overcome this, FaceStation 2, the facial recognition system we use in our biometric turnstiles, also provides a unique QR code for all site workers.

This means that if users are uncomfortable with facial recognition technology, they can still gain access using their mobile phones.

Many sites have gone that extra mile with their turnstiles, installing hand sanitising stations on the outside of the pod. This ensures reduced risk of cross contamination and is a sensible practice that many organisations have adopted.

Interestingly, however, some people have enquired about turnstiles that have an automatic overhead sanitising spray function that activates once people have left the pod.

We would argue that turnstile cabins or pods that enable air to flow freely (unless they’re fully secured overnight via shutters or doors), better reduce the chance of virus particles spreading. Turnstile units with built-in sanitiser sprays tend to be closed most of the time (doors are only opened briefly as users enter and leave the unit) and need spray-sanitising due to the reduced airflow.

There you have it: turnstiles can probably do a lot more than you initially thought. Especially during these times of COVID-19 compliance and extra precautions.

So, if you’ve got a turnstile that’s not being used, or not being used to its fullest potential, we actively encourage you to get in touch to discuss the Health & Safety-meeting efficiencies that are at your disposal.