Sunday 3rd of May saw the first South Sussex Syndicate Charity Clay Shoot in aid of Help for Heroes. The event was hosted, quite rightly for such a noble cause, in spring sunshine at the renowned Southdown Sporting Gun Club, just north of Findon in West Sussex. 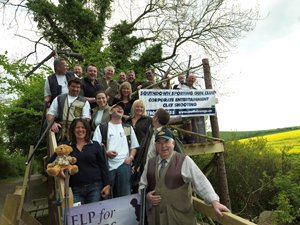 The layout that Dave and Shaun Peckham of Southdown put on included some simpler targets for the less experienced and some more testing for those who were there with the competition in mind. The format was a 100 bird sporting layout, followed by an 80 bird flush for each of the teams of four. There were prizes for Top Team, High Gun, Best Novice, Senior and Lady Gun.

The team competition was won by West Sussex Driveways with a great combined score of 330. The High Gun was Trevor Bell with an excellent 98 ex 100 and Top Lady was collected by Natalie Trist with 53. The Novice high score was won by David Tanner with a creditable 73, the Senior by Brett Hammond with 66 and the Junior plate has been awarded to Harry Blurton, aged 11, for his display with his .410.

The organisers were delighted that James Purdey and Sons were able to sponsor the event and Steven Murray of Purdey came down with two beautiful guns, a traditional side by side and their new over and under Sporter. They kindly manned the ‘have a go’™ stand for a couple of hours allowing the rare opportunity to shoot one of these fine guns. Other sponsors included Lyalvale Cartidges, Hearability and other local businesses. The organisers are extremely grateful to the sponsors who contributed their support and to all those who helped on the day.

The afternoon was complemented with a hog roast, a bar and, in the evening, an excellent 70’s rock band, Highway Jones – who gave up their time for free. Overall, the event has been a resounding success and has raised over £3,000 for Help for Heroes. Next year it is hoped to get more entries and more sponsorship to ensure the charity benefits to an even greater level.

There are great many sponsorship opportunities available for the 2010 event including, team trophies, individual stands and the flush sponsorship, for further information please contact the organisers sponsorship@southsussexsyndicate.co.uk.

Why Hazardous Waste Disposal Can Be a Problem – Especially if Done Illegally
January 9, 2020

Human and Hazardous Waste and How We Can Help
November 26, 2013