When an 80-year-old pensioner collapsed at the Martlets Shopping Centre, in Burgess Hill, the quick thinking of Tony Reader, Secure Site (UK) Security Manager, saved his life after he stopped breathing. Relying on his training, Tony, after calling for an ambulance, started giving CPR – refusing to give up for over half an hour until the casualty had recovered a good pulse. 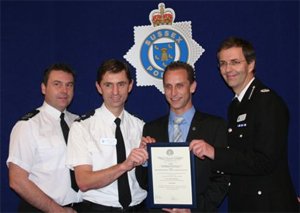 Mr Sewell was taken directly to the Princess Royal Hospital where he never fully regained consciousness and sadly passed away 10 days later.

Not expecting recognition for his actions, Tony was surprised when he was invited to the Sussex Police North Downs Division Awards Ceremony, held at Slaugham Manor, Sussex, where he was presented with an Humanitarian award by Assistant Chief Constable Robin Merrett for his life saving efforts, which enabled Mr Sewell’s family to say goodbye to their much loved father and husband with dignity.

When asked about the events at the shopping centre, Tony said, “the first aid training just kicked in and you just get on with it”

Centre Manager of the Martlets, Graham Fogerty, was full of praise and said the overall response had been “incredible.”

“He is just highly trained in all aspects of the job, he is a real professional”

Secure Site (UK), Commercial Manager Nick Swalwell said “I have worked with Tony for several years and his cool-headed approach doesn’t surprise me in the least, he’s a real asset to the a team and a shining example to all professional Security Staff”.

Help 4 Heroes
November 5, 2009
Email us for free advice or a no-obligation quote